In 1890 William Fraser recorded a household and teind income account book for Coldingham Abbey in 1592. Fraser noted the physical condition of the booklet as ‘partly decayed’ or ‘much mutilated at the beginning’. He printed a brief summary of the contents and the historical background, and while ‘none of the entries contain special historic references’,  he recorded some price data for food, spices and aqua vitae. I recently had a chance to look at at this account book. [1] Further household accounts survive in the rental income and discharge of Auldcambus in 1596 and 1597, which include a miscellany of payments made at the direction of the Earl and and Countess of Home. [2] 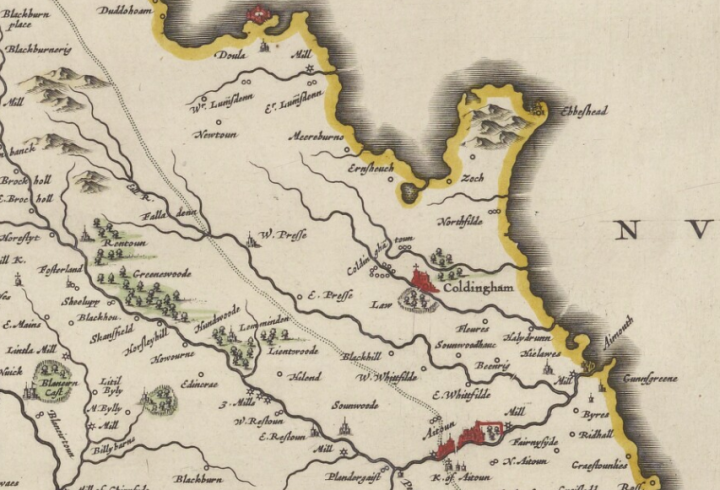 Alexander, Earl of Home, his wife Christian Douglas, and her children from her first marriage to Lawrence Master of Oliphant, stayed at Coldingham Abbey in October and November 1592, following James VI’s grant of the abbey to Lord Home in August. The keys to the Abbey were in the hands of Alexander Home of Manderston. Francis Stewart, former Earl of Bothwell, had forfeited his commendatorship by treason. Disputes over various rights to Coldingham incomes between Bothwell’s sons and Lord Home’s heir would continue to 1624 and beyond. [2]

The agricultural charge and discharge includes some detail of the harvest. As commendator Lord Home collected the teind of the Coldingham lands, the tenth of agricultural produce, as his own. Fifteen ‘stakeris and forkeris in the barnyaird’ and other workers were paid 4 shillings a day for two days at the main teind, and nine were paid on the days peas were teinded. At Eyemouth, Margaret Glass was paid for supervising the teind of white-corn and peas over three days ‘in company with fourteen men waiting thereupon’. Thirty-two cart journeys brought the Eyemouth fish teind to Coldingham with the contributions of poor tenants who had no horses to carry their teinds. [3]

One page lists the wages of servants and ‘boys’ at Coldingham from the 27 November to the 27 December with their horses. Most of the ‘boys’ are described as the man of another servant, member of the household, or kinsman. The usual rate was two shillings a day when these men were in wages. William Blair was paid more, 40 pence a day because ‘he was my lady’s man’. The Auldcambus accounts gives some clues about these servants’ costumes, with blue and Yorkshire cloth, and a blue bonnet for Thomas Hog, Blair’s successor in 1597. Christian Lady Home also had a ‘clarscha’ man, Robert Calbrathe. An account for her own clothing in 1590 show that she used the same Edinburgh tailor as Anna of Denmark, Peter Rannald.

Lord and Lady Home arrived at Coldingham on 25 October 1592. A number of changes to the existing accommodation at the Abbey were required. Some roofs were repaired with new rafters and roof spars and turf at 20s for a thousand ‘diffottis’. Gavin Liddel a stonemason repaired the checks of the barn door. Lord Home and neighbouring patrons also employed the mason John Duncan from Strathmiglo in Fife. [5] Cuthbert Windrim and his wife cleaned the yard, kitchen, cloister and stable, and Cuthbert provided night security for the month. A later account includes 80 nails for hanging tapestry, in 1592 the smith Thomas Wallace made a variety of nails for the works at Coldingham, and locks for doors, hooks for hanging meat in the cellar, and tools for butchery.

Ale, best and small, was supplied in several sorts of barrels by brewers in Coldingham, including Gavin Blyth, John Hopper, Thomas Lumsden, Mungo Webster, Kreschen Grenlaw, and John Kirkaldy’s wife. Kreschen supplied a ‘stubie’ – a jug of five pints on 6 November for 4s-2d and a five gallon barrel of best ale on 22 November for 34s-4d. Seven cakes of soap ‘to weshe with’ weighing a pound each cost 28d. It is unclear where the supplies of groceries and spices were bought, saffron cost 2s a drop, ginger 2s an ounce and pepper 32d the ounce. Aqua vitae was supplied to Lady Home on a daily basis in small measures of one, two, three or four gills at 2s a gill, possibly for medicinal use. (These figures are in Scots weights and money).

Carpenters improved the storage in cellar and pantry, and made stalls and hecks in the stables. Patrick Lumsden built a partition wall in the cellar, and a ‘gantry’ – a rack for barrels. He also erected four beds, set up the kitchen table, the ‘by board’ in the hall, and the table, the ‘buird’, in the little hall. John Polwart was paid for ‘translating’ the hall table and cupboard from the chamber into the hall. He made a dry stool or close stool and axles for farm wagons.

A ‘by board’ is usually a second dining table in a hall. The hall table in the account may be a large hall table, or perhaps the smaller high table. The chamber was probably the first room beyond the hall, often a best bedchamber in the customary suite of chamber and hall. The little hall may have been a lesser or ‘laich’ hall where servants ate together. The account of roofing also mentions a fore-chamber and the ‘lang-loft’. These rooms were made in the old prior’s lodgings and monastery buildings.

This detail of carpenters and furniture is rare in Scottish household records, recording a visit to a new home with the tasks required to make it habitable. Carpenters who worked on the building were also employed to move furniture. This was presumably massive oak furniture, usually immobile, which required the expertise of Polwart and Lumsden to move and re-erect. Several Scottish inventories suggest that hall tables were probably not regularly dismounted to free up space in Scottish houses. [6] The hall furniture, Bothwell’s or older, may have been dismantled and moved into the adjacent dais chamber for greater security when the Abbey was empty. John Polwart could also make new items like a close stool, and he is one of the few Scottish sixteenth-century furniture makers whose names are known to us.

Another document from the same cache tells us something about teinds and a teind barn on 14 August 1634.  Alexander’s second wife and widow, Mary (Dudley) Sutton dowager Countess of Home set the teind barn, the yard and some of the teind duties of Coldbrandspath to John Arnot, the postmaster of Coldbrandspath, for five years. The countess reserved several rights and Arnot was also expected to carry out immediate repairs. The barn was ‘ruinous, waste and decayed’. Arnot paid a cash rental of twenty merks yearly. Doubtless this was intended to be lucrative to Arnot, and also removed an adminstrative burden for the countess. Arnot was perhaps a useful person to cultivate. [7] The reserved rights, to store and stack sheaves of corn belonging to the countess in the barn, and thresh in the yard are again evocative of early modern arable practices, as are the details given the 1592 Coldingham rental.

[7] 14 August 1634, Mary dowager Countess of Home let the teind barn reserving to herself and servants the right to ‘stak in the said barn yaird sa many of the teynd sheves of the lands within the parochin of Coldbranspeth [… ] and to cast in & thresh the samyn in the said barne’. At this time she employed a ‘barn grieve’ to supervise her harvest, NRAS 859, 17/2.

One thought on “At Coldingham Abbey in 1592”